“More Gore than a bomb in a butcher’s shop”. 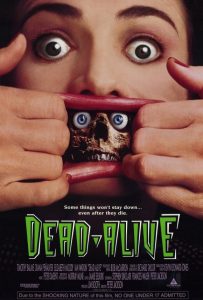 Long before his forays into Middle-Earth and Skull Mountain, Peter Jackson (Lord of the Rings ’01-’03, King Kong ’05, The Hobbit ’12-’14)  spent his early directing career up to his elbows and more in god awful gore. Many so called Peter Jackson fans are blindly unaware of his involvement in splatter-house and supernatural horror films. One of his more well known films from this era is Braindead, known in some countries by the alternative title Dead Alive.

Braindead (1992) is the brainchild of Stephen Sinclair (Meet the Feebles ’89, Lord of the Rings ’02 ). It was directed and produced by Peter Jackson (Bad Taste ’87, Heavenly Creatures ’94, The Frighteners ’96) along with the now famous WingNut Films as well as other well known members of his crew including Frances Walsh, Jamie Selkirk, Ed Mulholland and Richard Taylor. It stars Timothy Balme as Lionel Cosgrove, Diana Penalver as Paquita Maria Sanchez, Elizabeth Moody as Vera Cosgrove, Ian Watkin as Uncle Les, Brenda Kendall as Nurse McTavish, Stuart Devenie as Father McGruder and Jed Brophy as Void.

It starts out with a guy called Stewart (Bill Ralston) a New Zealand zoo official and a local guide, carrying a captured Sumatran Rat Monkey, being chased through a rocky ravine by a group of angry, war-painted natives; Jackson’s Lord of the Rings fans will recognize the ravine as the Paths of the Dead from the Return of the King. After being surrounded by the natives and despite the misgivings of his guide, the zoo official is adamant he is taking the creature and promptly frightens the natives off by brandishing and firing a concealed sub-machine gun. The chase then continues into the valley where the zoo official climbs into the back of a waiting jeep and starts to drive. Coming to a sudden halt, to pick up the guide he had left behind, Stewart gets scratched by the Rat Monkey and the three local guides immediately panic and kick him from the jeep. Seeing a wound on his hand they all shout ‘Zingaya’ or ‘the bite’ and proceed to cut his hand off with a machete. Unfortunately for Stewart, Zingaya is noticed on his shoulder, chop, and again on his forehead, chop; and roll opening credits. A comedic start which sets the tone for what is to come.

Following the creature’s arrival at the New Zealand zoo, the film cuts away to a shop where we first meet Lionel. Lionel is a quiet man who lives with his repressive, abusive mother. Here he meets Paquita, a headstrong Spanish girl, who despite their differences and because of her strange grandmother’s tarot card reading, falls head over heels for him. Whilst Lionel and Paquita are on a date at the zoo, his mother who had found out and was spying on him slips into some fencing and gets bitten by the Sumatran Rat- Monkey. The noise and commotion this causes gets Lionel’s attention and this inadvertently ruins his date.

This is when things start to go downhill for Lionel as she soon becomes ill, dies and comes back to life, creating all sorts of problems for the darling son. In a twist on the usual zombie flick, Lionel tries to conceal the fact and keep her undead state drugged in the basement. Due to various untimely excursions by his mother, Lionel soon ends up babysitting an ensemble of zombies, including nurse McTavish, Father McGruder and a street thug named Void. This turns into real babysitting as McTavish and McGruder engage in some undead coitus and create the zombie baby Selwyn, who he ends up taking to the park in a barb-wire secured pram in one of the films many funny scenes. With the numbers of undead growing (literally), things are made worse by his Uncle Les who is trying to blackmail him out of money and his home after discovering “a nice collection of stiffs” in the basement. To celebrate his new found wealth Uncle Les has a party in his new digs whilst Lionel tries to get rid of the zombies in the cellar. However things go even more pear-shaped when Lionel mistakenly injects the cellar’s inhabitants with animal stimulants instead of  with an overdose of tranquilizers. These super-charged zombies soon make mince-meat of the party guests in a rib-cage ripping, face-tearing bloodbath.

Paquita and Uncle Les strive to defend themselves with an assortment of objects including cleavers, garden gnomes and an attempt at zombie baby blending. In the end it falls upon Lionel to kill the zombie’s, save Paquita and deal with the monstrosity that his mother has become by any means possible, including the unconventional use of some gardening equipment; which culminates in one of goriest scenes ever captured on film.

With hilariously gratuitous violence, Braindead is one of the gem’s of the zombie genre. The slapstick nature of the film makes it a perfect film to watch with friends as you’ll be laughing, screaming or even throwing up depending on your stomach’s resolve. It surpasses the Evil Dead 1 &2 in levels of gore and you would have to venture (if you dared) into a Troma (Class of Nuke’em High ’86 Redneck Zombies ’89, Poultrygeist: Night of the Chicken Dead ’06) production to possibly find an equal. However, unlike the last three films mentioned, the special effects in this film, done by Richard Taylor, are of a far better quality and in the last 25 minutes they become quite astounding. The music for the film is simple and effective for the most part and on occasion it uses the long running Archer’s radio program as background noise with semi-relevant conversations underscoring what’s happening on screen. Overall, it’s a tremendously fun film, with a whole range of outlandish scenarios and comedic one-liners, and as such should definitely go on to your to watch list (Full YT film link at bottom).  – The Eyez 187

According to the film’s lore, the Sumatran Rat Monkey is the offspring of small tree monkeys being raped by giant plague rats. This creature is purely fictional and only inhabits “Skull Island”, which is funnily enough the island that King Kong was supposed to have been from. No wonder the native people are weird, just look at the evolution of species.

One of Peter Jackson’s common film traits is for him to have a cameo. In this film he briefly plays the gormless undertaker’s assistant. Interestingly both Frances Walsh and Jamie Selkirk also have cameos, as a mother at the park and a father at the zoo respectively.