This isn’t Bigfoot and the Hendersons…
Sadly

Directed by Bobcat Goldthwait (you might remember him from such roles as Zed in the Police Academy films) and starring Bryce Johnson and Alexie Gilmore, Willow Creek is a found footage film centred around the Bigfoot lore.

Bryce plays Jim who is being a Bigfoot enthusiast wants to go to the place of the infamous Patterson-Gimlin film and sighting.

Bringing his girlfriend Kelly they set off documenting their trip, and taking lots of camera batteries it seems, hoping to find evidence or expecting to find nothing at all as Kelly is a non-believer.
Here is problem number one with this film, the characters.

I didn’t like them. Jim was forgettable. He was bland and boring with not much of a personality and Kelly plays the part of the constantly negative, always throwing out digs and little insults (though getting upset when Jim throws one back) I know better girlfriend.
So one dimensional generic characters we’ve seen before and if the rumours I heard that most of this film was improvised then I suggest maybe a script for Mr Goldthwaits next film.

The next problem is that despite the film only being 77 minutes the first 40 minutes are incredibly slow and for me at least, tedious to watch. I didn’t care for either character so why would I want to sit watching them prattle on for 40 minutes or even survive what fate awaits them?
I know that found footage films are supposed to be slow burners only to really get going in the last 30 minutes but you still need something interesting to watch or listen too. One person knocking the other for what they believe then both teaming up to knock everyone else gets worn out very quickly. 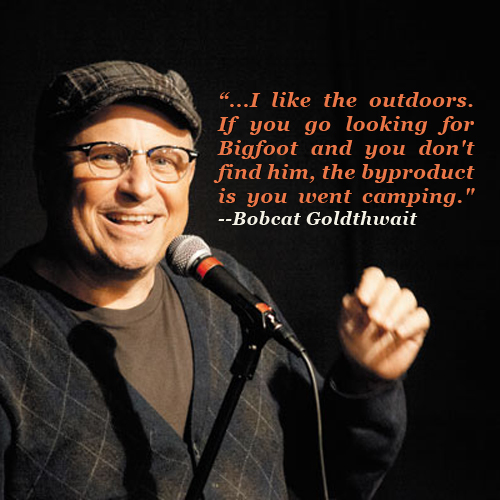 Then you get a scene in a tent that goes on for 10 minutes or more as they are awoken when they hear noises outside.

I loved this scene. I don’t know if this pay off is worth the first 40 minutes but it adds enough tension and isn’t afraid to take it’s time. Nicely acted, well mostly by Alexie Gilmore but both do a good enough job and I almost started to connect with the pair.

But Jims constant explanation of the noises as being from Bigfoot, whilst quite possibly accurate, did get very annoying and might make even the most ardent believer argue back just out of sheer frustration.

The following day any sympathy for these two is gone again when it’s back to normal so not until the next scene, the ending, does the film starts to shine again. I don’t know if I was happy with the ending. I’m not saying I need a film explained to me but sometimes directors can be a bit too ambiguous.
There are hints littered throughout the film of the pairs upcoming fate with Kelly unaware that she’s being particularly prognostic about her own when making jokes, it’s just a shame she wasn’t able to predict enough to stop her from going in the first place.