As it is Halloween 2018 it is time for me to review another series of horror films.
Last year I reviewed the Gingerdead Man & Evil Bong Series, there is a newer one I’ll have to catch up on, but lets see if we can go old school  this time round. 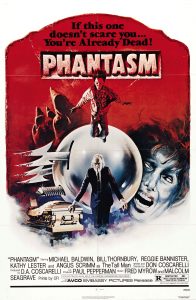 “The funeral is about to begin… SIR!”

Written, directed, edited and as much else as he could do to keep cost down by Don Coscarelli, Phantasm centres around a young boy Mike, as he tries to convince his older brother (Jody) that the local Undertaker is something more sinister than he seems.
And everything about The Tall Man (played by Angus Scrimm) is sinister to start with.

When a friend of Jody is killed Mike observes the Tall Man picking up and placing the coffin of Jody’s heavy friend in his Hearse by himself. This sets Mike and his overactive imagination into overdrive and he starts investigating the funeral home.

Aiding the Tall man are his Jawa like servants but it is the silver spheres that have become as synonymous with the series as the Tall Man himself, maybe more so that are his most deadly slaves.
Such a simple but brilliant creation helped along by the excellent practical effects when it makes its kill.

Don Coscarelli makes good use with what he has to deliver some creative shots that go along with his ideas.
All in all this is pure 70s goodness from the simple but suitable theme tune to the otherworld imagery and obviously the hair topped off with the confusing ending. 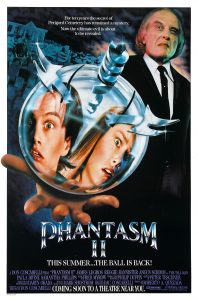 Almost 10 years later we have a follow up to the original.
It starts during the slightly confusing finale of the previous film with Reggie trying to save the young Mike from the Tall Man.

It then moves to 10 years later and Mike has been discharged from a mental institute where he immediately sets about stopping the Tall Man.
Again things are confusing as just like at the previous finale, Reggie thinks the earlier events are just dreams.
That the house was blown up because of termites!?!

This is never explained.

Regardless they decide to go after le grand homme and find Liz, a young girl of Mikes age that has been contacting him through his dreams and is aware of el hombre alto and that he is on his way to her.
Der große Mann has been busy in the years Mike has been locked away and has left a number of towns as more literal than figurative ‘ghost towns’. (He’s turned the deceased inhabitants into the undead Jawas)

Director Don Coscarelli doesn’t expand the series much here apart from giving the silver spheres some upgrades and introducing us to the uber gold sphere.
Watch the credits to hear the theme tune also receive a nice upgrade.
He isn’t as creative with his shots as before and in a lot of ways this retreads earlier ground only with more explosions and gore.

That said this is a more action packed 80s follow up and benefits from sticking closely to the established lore instead of trying to deviate too much or fly off in a different direction. 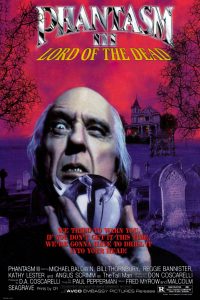 Starting off by doing a Back to the Future part II and re-filming part of the last films ending as it was only with a different actor.
The actor in question is A. Michael Baldwin (not the villain from Coronation Street) who returns to his role of Mike that he played in the first film. In fact actor Bill Thornbury also reprises his role of Mikes older brother Jody.

With the all the original cast returning the film starts with the Tall Man kidnapping Mike with Reggie hunting him down.

Along the way he meets child killer Tim, and I mean a child that kills anyone that invades his home. Also coming along is Rocky a former soldier looking to avenge her families disappearance at the hands of you know who.

Playing up on the comedy elements at time a tad, and I mean a tad, Phantasm III goes further into why the Tall Man wants Mike and gives more of an explanation of what is going on but not too much. This, combined with director Don Coscarelli once again not going crazy like sequels tend to do, helps this feel like another direct continuation from the previous instalment.

It really is more of the same so given how much I’ve enjoyed the last two there isn’t much to say. At least it hasn’t moved to space like a few other franchises that could be mentioned.

The effects are still good and messy though due to the reflective property of the spheres I don’t think I’ve ever seen the crew of a film as often nor as much as here but the biggest improvement is the music.
It is so impressive and plays almost constantly which filled the room thanks to my sound system and really is a good listen.

Like I said, not much different and more of the same makes this worth a watch. 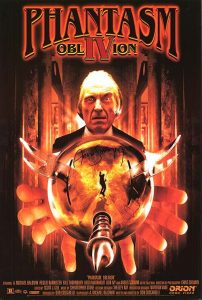 “Ice cream man, it’s all in his head”

Again picking up during the events of the last films finale, we see how Reggie escapes and what happened to Mike.
Unfortunately we do not know what the fate of Tim is.

Whilst Reggies story is about finding Mike; for Mike it is about confronting the Tall Man and along the way we learn his origins.
Sort off.

The Phantasm series has never been about explaining things too much and the same is true here.
So we are told his origin but there are plenty of questions regarding the Tall Man left unanswered.

That isn’t a problem as ambiguity and mystery in a villain can work to its favour but what is a problem is given the constant flashbacks to the original movie, Oblivion decides to mess with the original fate of Jody as well as his and Mikes parents.

I don’t understand why filmmakers do this. They have an established lore and they know their fans will pick up on these changes yet they go ahead and make them.
But one aspect of the original that fans were unhappy was missing in the previous two sequels was the dream sequences, what is real and what is in Mikes mind and that makes a welcome return here.

The Tall Man also has a more prominent role. So far he has been that unstoppable menace making sporadic appearances and not saying anymore than he needed to whereas here with Mike trying to figure out what is happening to him and why the Tall Man wants him so badly he is far more chatty.

Phantasm reportedly had a running time of over 3 hours with multiple endings filmed and director Don Coscarelli manages to very cleverly integrate some of that footage here and have it seamlessly fit, almost as if it was filmed specifically for Oblivion.
Seeing these scenes is great and just works for the most part but like I mentioned earlier it does appear to rewrite the originals ending.
Still, very original and compliments the new footage.

Instead of being seen as more of a departure for the series this actually goes back to its roots in many ways and is unfairly maligned because of that.
It does contradict the earlier series in places but also expands the lore in others and needs to be seen by any fan.

The final entry in this series follows on as usual directly from Oblivion but whereas that was more Mike’s story, Ravager is Reggie’s story.

Reggie is on the look for the Tall Man and Mike but he is jumping through time and (possibly) dimensions leaving him confused and unsure as to what is real and what is a trick from you know who.

Ravager really plays up the dream\surrealist element the original is famous for and is just as confusing trying to work out what is real and what isn’t.
Don’t expect the film to hold your hand and explain it to you. You should know by now this Phantasm doesn’t do that.

For me this only works for you if you choose which ending you want. To interpret them as you see fit to make sense of the entire series. To come up with your own theory which many fans have.
Otherwise you are left with an incoherent, confusing series of sequences involving Reggie and multiple worlds which offer no conclusion at all.

Sadly this was filmed at a time when unless you had the money for the most expensive digital camera you was stuck with something that looks like it should be used for a daytime soap.
Well, that’s a tad harsh as it isn’t that bad but it does come across as cheaper than it should and the lack of stedi-cam doesn’t help as does the cheap CGI which us horror fans are only to used too.

That isn’t to say all the effects are bad and by the end I was so engrossed in the film and its ambition that the effects were forgivable.

The music is once again top notch, I love this series’ score and everyone involved really gave it their all especially Angus Scrimm and Reggie Bannister.

Is it the conclusion we wanted? Probably not, but thanks to the open ended nature of it you can choose how it ends.

Providing the Tall Man lets you.

Conclusion
I love these movies. The Tall Man is a great villain and Angus Scrimm is simply perfect for the role. His booming voice and tall stature combined with his most deadly weapon… his stare.
I like how Reggie went from a minor and quite literally ‘background’ character (see the first scene with him and the Tall Man where his is there in the foreground loading up his Ice cream van and barely in shot) to being the lead hero.
Seeing the very young actor A. Michael Baldwin grow up helps you gain a perspective on how long they have been fighting the Tall man plus Bill Thornbury’s constant returning as older brother Jody adds to that familiarity for fans.

Not many series keep the original cast playing the original characters and keeping the focus of the show the same and simple.
Stop the baddie.

At some point each series loses its way, I’m sure there are plenty that will say Ravenger did that, but Phantasm manages to remain constant to its core.
Along with the main cast, Kat Lester keeps popping up as the Lady in Lavender throughout. That scene in the first where she is holding the knife and smirking at Mike as he very carefully tiptoes past her is one of the best in all the films.

Yes they are confusing and complete head-scratchers but that is Phantasm. Thanks to a great cast, music and lots of inventive ideas mostly surrounding the Tall Mans help i.e. the many variations of the spheres that Don Coscarelli manages to throw into each film without it getting too silly, makes this a classic franchise.

You might not like how it ends (I did but only after a lot of thought) but each one is entertaining as snot if you’re a fan.

Anyway here is a joke poster I made one day.
I think the series might not have fared well in my hands.